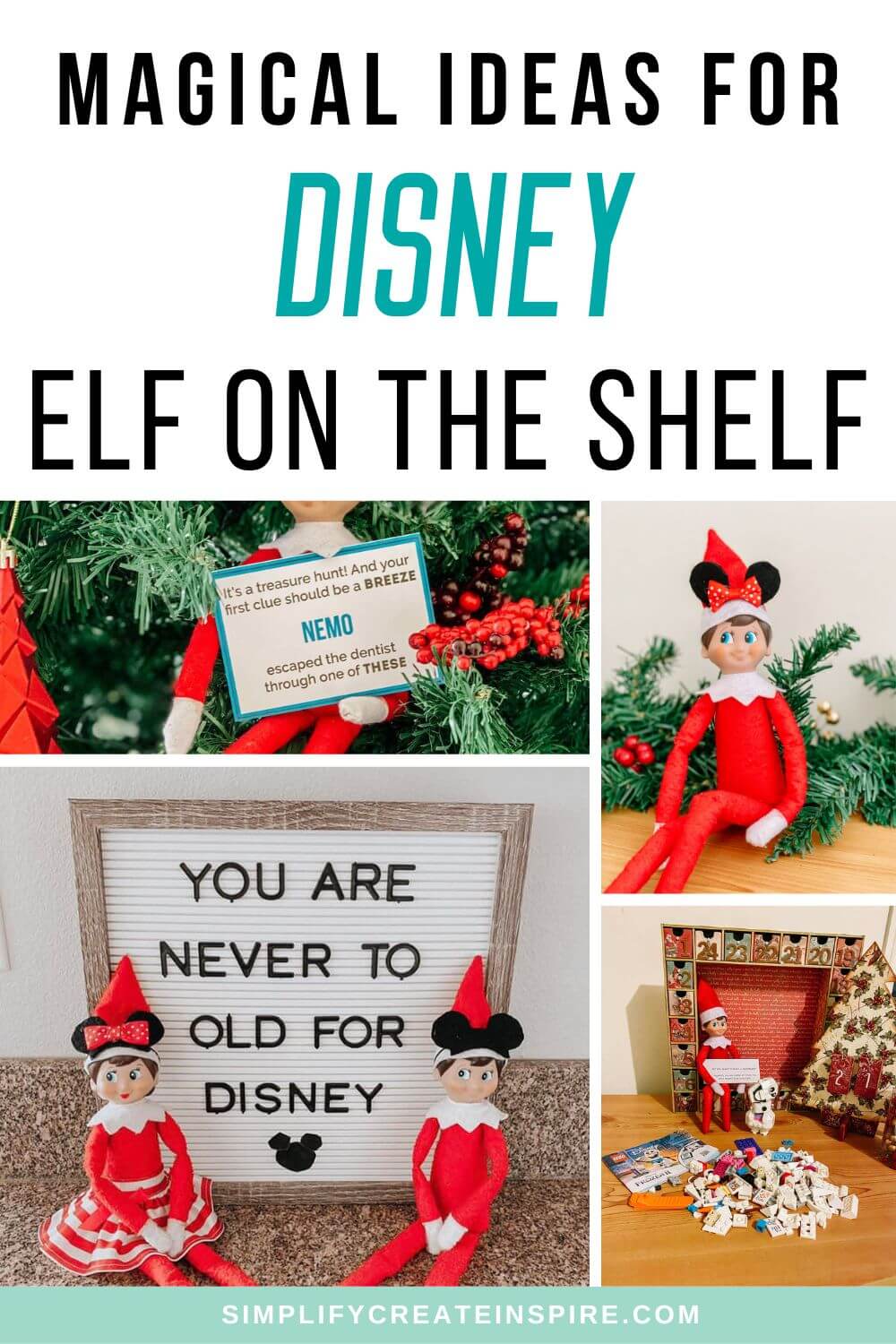 If you’re looking for some fun ideas to add to your Elf tradition, why not try some of these Disney Elf on the Shelf ideas? Whether you are a family of Disney fanatics and want to add some extra magic to your December or you are planning a big Disney vacation reveal like we were, you are sure to find some fun ways to add a Disney twist!

And it’s not only classic Disney that makes the cut! Why not try some of these Elf on the Shelf Disney ideas incorporating their other iconic characters from Star Wars and Marvel too? They are both part of the Disney family these days.

Elf On The Shelf Disney Reveal

This year I had the biggest surprise for my family for Christmas. Not even my husband knew about this exciting surprise. Earlier in 2022, Disney cruises announced they would be coming to Australia and New Zealand. FOR THE FIRST TIME EVER!

A Disney cruise is one of those bucket list experiences I wondered if I’d ever get the chance to have, especially when the kids were young enough to enjoy it. After all, North America is so far from Australia and with travel being off the cards for a few years, it sure did delay plans for a trip anytime soon.

So I planned the biggest surprise ever for my family, including my husband, by booking us a Disney Wonder Cruise departing from Brisbane, Australia.

And I wanted to make the announcement memorable for Christmas so that’s where the Elf On The Shelf came into it!

For the entire month of December, I themed our Elf On The Shelf visits around Disney, with subtle clues that would all make sense on Christmas day, for the ultimate Elf On The Shelf Disney surprise!

I have also included a few other cool ideas from other creative parents featuring their own Disney Elf On The Shelf ideas.

Make sure you come and join our Elfing Around Facebook group for even more ideas and inspiration!

Disney Elf On The Shelf Ideas

Whether you are planning a Disney vacation reveal, or simply love all things Disney, these Disney elf ideas are sure to help you add some extra magic to your holiday season.

Here are some of my favourite Elf on the Shelf Disney ideas:

Give your elf an instant Disney makeover with your own tiny Disney ears. This is one of the easiest Elf props to make and you might even have everything need at home already since you only need black felt, wire and a glue gun! Check out my elf Mickey ears tutorial.

Each year our elf arrives back with an advent calendar for each of our kids. We always get 2 different ones and they always alternate opening each one so they each end up with half of the gifts from each calendar.

Thankfully it was their idea and they share really well so this year we added an extra element of fun with a Disney-themed scavenger hunt from Picture The Magic.

Do You Want To Build A Snowman?

You can also do this activity using toilet paper rolls and sticking on noses, buttons and scarves instead.

Each year on her birthday, our elf pranks my eldest daughter with something very cheeky. One year he wrapped all her underpants up as a gift. This year, he made her think she might be getting a Disney vacation surprise only to give her nothing.

This might be a little mean if you aren’t planning something truly spectacular later on or if your child is especially sensitive. My daughter has a great sense of humour and is old enough to know it was very unlikely she was getting a holiday.

Plus I have the real Disney trip reveal on Christmas day to make up for it!

A matching Minnie Ears headband for you and your elf! We still have our ears from our first trip to Disneyland when the kid were 2 and 4 years old so it was a cute scene to set up with their elf to match.

Build Elsa’s ice castle from toilet paper rolls (or make your own Disney castle). There are broken up styrofoam pieces to look like snow around the bottom, which my kids know I hate and would never do. Anna is also holding a sign ‘What is Mickey Mouse’s favourite treat? MICE CREAM’ and a note for the kids to check the freezer where some ice creams were waiting for after dinner.

We celebrated the end of the school year with a pamper session at home with these cute Minnie Mouse pamper packs from our local Target store. The girls had pedicures, painted nails and then picked out pretty dresses before getting their hair done. We took them out to dinner to celebrate school finishing for another year.

Elf and his Barbie friends have their bags packed and their favourite Disney toys, ready for a trip to Disneyland in the Barbie plane!

Elf As The Little Mermaid

Under the sea fun with a makeshift red wig made from wool (and not a very good one) and a Barbie mermaid tail to become Ariel from the Little Mermaid, hanging with some new sea friends.

Postcard From A Friend

This one was a little more of a hint that we had a Disney cruise Christmas surprise coming up when our elf got a postcard from his elf friend Jingles who was on a cruise with his family.

Create a Disney-inspired parade with the Elf on the Shelf and Disney toys for a fun bit of Disney theme park magic at home. Our elf had a little sign created from pencils and cardboard.

These soup mugs were perfect for creating a mini teacups ride at home for the Elf and some friends. What is your favourite ride?

It’s always a laugh when our elf does things to the family photos. Last year it was adding red noses so everyone looked like Rudolph. This year, it was Mickey Mouse ears!

Get these adorable printable props with Disney ears, Disney shirts and treats for your elf.

Never Too Old For Disney

Sometimes a simple letterboard is all you need to set the scene! This is one you can prepare ahead of time and easily set up when you’re short of time.

If your kids love superheroes as much as we do, they will love these Marvel Elf On The Shelf ideas, featuring their favourite Avengers:

Look out! The elf upset Spider-Man by telling him he wasn’t the strongest Avenger and now he’s caught in the web!

Sometimes the most simple idea is one of the most fun. Our elf brought a letter about watching the Guardians Of The Galaxy Christmas Special with Santa and how much he always wanted to be a superhero. He challenged the girls to draw themselves as either a Disney Princess or a superhero. They chose to do both!

The kids got a big giggle out of this one. An elf-ercise exercise program (printed from the official Elf on the Shelf website) and our elf doing a plank.

Then finding their iPad with a new screensaver of our elf’s face superimposed on the body of Thor.

Move over Spider-Man, there’s a new masked superhero on the block! A simple hand-drawn Spiderman mask stuck on with double-sided tape and some string to hold the elf upside down.

Our elf’s hat comes off so we had that hanging by the string below him as well.

While not specifically a Marvel superhero idea, ziplining is definitely a cool superhero act! You could add a cape or some other accessories to dress your elf as your child’s favourite Avenger as they glide towards the tree on a candy cane zipline.

Star Wars is a beloved classic that has lasted the generations and there are so many fun ways you can create Elf On The Shelf Star Wars ideas:

This is probably the most horrid-looking Yoda you ever did see but it was super quick to draw a Yoda face and lightsaber and adhere them with double-sided tape for a funny and simple Star Wars elf idea.

Turn your Elf on the Shelf into the cute Star Wars droid BB-8 with this free printable costume.

Whether you’re looking for some classic Disney Elf on the Shelf ideas, or want to add a little bit of magic with some themed visits inspired by your favourite characters from Wars and Marvel, there are plenty of fun ways to get into the Christmas spirit! These Disney elf ideas are also perfect for your Disney vacation Christmas reveal too!