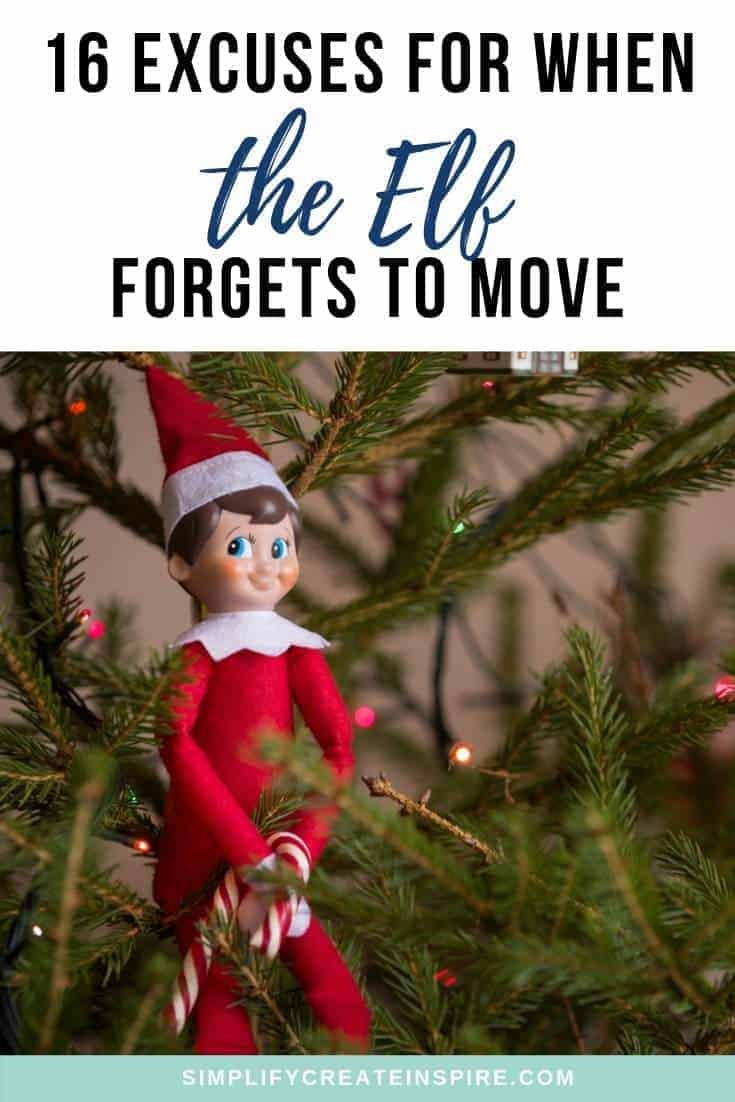 Christmas is coming, and if you jumped on the Elf on the Shelf craze at any point, you are likely already feeling the pressure of preparing for a whole month worth of Elf scenarios in your home. But what happens when you forget to move the Elf?

Suddenly you are on the spot trying to come up with reasons why the Elf didn’t move… These Elf on the Shelf excuses are for you!!

Why Elf On The Shelf Did Not Move

I can honestly say at least half the nights in December I flop into bed after a big day, looking forward to sleep.

And then I remember THE ELF! I haven’t moved the Elf.

But those are the good nights. The ones when I actually remembered!

There were also a couple of nights when I didn’t remember at all, and I’ve been doing this Elf on the Shelf thing for a few years now.

You would think I would be a pro by now. At least now I am armed with plenty of reasons why the elf didn’t move. I also haven’t forgotten for a couple of years.

Make sure you come and join our Elfing Around Facebook group for even more ideas and inspiration!

Ideas For Forgetting To Move The Elf On The Shelf

To help you avoid those on the spot explanations when your kids wake up the next day full of Christmas spirit to find their Elf sitting in the exact same spot, I’ve put together a huge list of reasons why the Elf did not move.

Some of these reasons are with the help of my community members and their brilliant ideas!

My Favourite Excuse For Why The Elf Didn’t Move

Like I said, I’ve forgotten to move the Elf a few times now and thankfully my kids are young enough to accept my default answer…

The Elf did not move because you have been naughty!

It’s a simple one but it can be very effective. December is that month of the year when kids suddenly take reminders about bad behaviour very seriously.

At least when a 30CM tall elf is concerned!

Much like when the tooth fairy leaves reminders about brushing their teeth twice a day if they want to start getting more money again! #parentinghacks

But what if they have been on their best behaviour? That excuse may not cut it! So here are loads more reasons to keep in your back pocket this holiday season:

17 Elf On The Shelf Excuses For When You Forget

Prepare Ahead With A Letter

If you know you are prone to needing Elf On The Shelf excuses from time to time during December, why not prepare ahead?

Write up a messy handwritten note from your Elf to your child explaining why they did not move. You could have a couple of options ready to go.

A note about being on strike for bad behaviour is an easy one.

In case this one doesn’t work for your kids, because they are actually behaving like angels in preparation for Santa’s arrival, choose one about running out of magic dust perhaps instead.

Once your child alerts you to the situation, you can let them know their Elf left a note in a secret place (planted by you earlier just in case).

Just make sure it’s somewhere they won’t accidentally look and that you dispose of it after Christmas!

How To Get Elf On The Shelf Magic Back

If your child is concerned about your Elf on the Shelf not moving, even after giving one of the excuses, work together to restore the elf magic.

This is a fun way to reassure your child everything is okay after a forgetful incident. A little Christmas magic goes a long way.

You can sprinkle a little cinnamon next to your Elf or sing them a Christmas carol. If you have any glitter, a small sprinkle over your Elf is a magical touch too!

Check out the official Scout Elf website for more ideas on how to restore Elf magic.

Still Not Getting Better At This Elf Gig?

Maybe you’re starting to regret taking on this Elf responsibility! I know I have those moments where I wonder ‘What was I thinking!’ so this could be a solution.

One of the popular images doing the rounds on Facebook and Pinterest in December is one of The Elf On The Shelf with a broken leg and plaster cast.

The Elf is no longer able to move and must observe from the same spot all month long.

That’s a next-level parenting hack right there if you really don’t want to go to the effort of finding new Elf on the Shelf ideas every day in December.

Would you try it?

Where To Buy Elf On The Shelf

Haven’t adopted your Elf family member yet? The Elf on the Shelf sets can sell out quick around mid-November onwards so get in early so you don’t miss out.

Many department stores around the world stock them, such as Myer here in Australia or Walmart in the US.

Alternatively, you can purchase Elf On The Shelf online, including different types and accessories, ready in time for the mischief to begin on 1 December.

Don’t forget to grab your free Elf Planner to help you stay organised too!