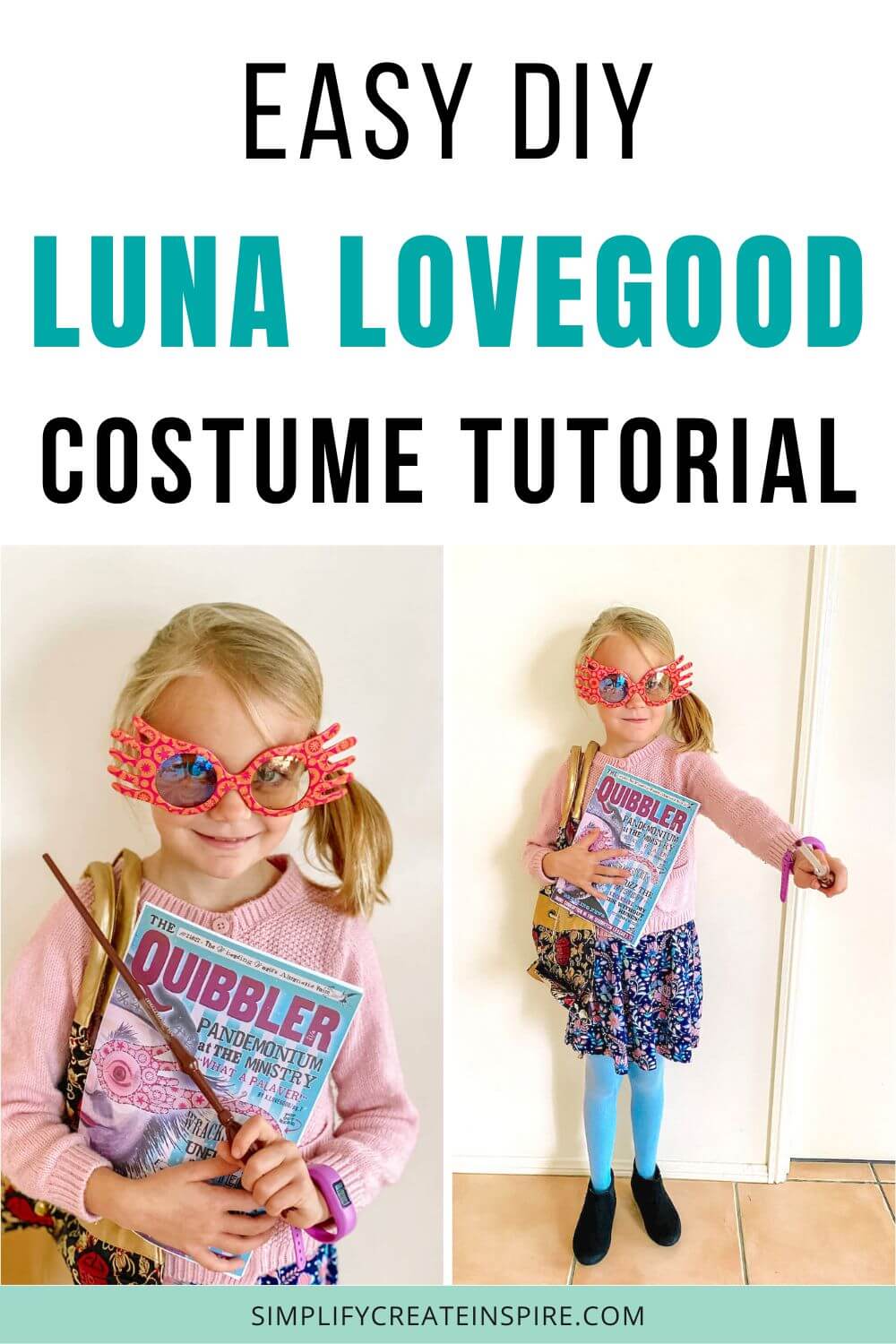 Need a fun and easy costume idea for your child for Book Week? Try a DIY Luna Lovegood costume – one of the favourite Harry Potter characters! This tutorial will show you how to create the perfect outfit in Luna’s quirky style, without spending lots of time or money and mostly using items you might already have at home!

While everyone is dressing up as their favourite Harry Potter leading characters – Harry, Hermoine or Ron, you can have your child stand out in the crowd by dressing up as Luna Lovegood.

As one of the more eccentric characters from the Harry Potter book and film series, she is known for her unique fashion sense – often wearing mismatched clothes and accessories.

This makes her an ideal candidate for a DIY costume!

While you could certainly go for Luna’s Ravenclaw robes and Hogwart’s uniform for your book character costume, we opted for her iconic 3D glasses Quibbler costume instead!

Not keen on DIY? You can also buy a Luna Lovegood costume that is ready to wear!

Why Dress Up As Luna Lovegood?

While Hermoine might be the heroine both my girls adore best of all the Harry Potter Characters, Luna Lovegood is a great choice of character for a number of reasons.

Firstly, she is not as commonly seen as some of the other Harry Potter characters, so your child is likely to stand out from the crowd if they choose her!

Secondly, as I mentioned earlier, Luna’s fashion sense is unique and this makes her an ideal character for a DIY costume.

And finally, she is such a kind and accepting character who sees the best in everyone – something we could all learn from! Especially when it comes to her willingness to embrace who she is, no matter how others might see her.

This makes her an inspirational book character for kids who need a little reminder sometimes to love who they are.

How To Make A DIY Luna Lovegood Costume

To create our Luna Lovegood costume DIY, we incorporated a mix of items from my daughter’s existing wardrobe with a couple of store-brought accessories and a DIY printed Quibbler prop to finish the look.

One of the most iconic parts of this DIY Harry Potter costume is the glasses – The 3D glasses Luna gets from her latest issue of The Quibbler.

We purchased our pair of Spectrespecs from our local Big W store for around $8 which is a relief as I had planned to purchase them from Amazon Australia but they sold out while they were in my cart!

There are versions of the glasses available to buy online at many different stores, including Amazon, Amazon Australia, Costume Box and Halloween Costumes.

If you are feeling creative, you could easily make your own DIY Luna Lovegood glasses using a pair of round kids’ sunglasses and some pink patterned scrapbooking paper.

You can also find a tutorial on how to make your own Luna Lovegood Spectrespecs here. It includes a printable glasses template.

Luna wears a pink tailored jacket with large buttons and a collar. To recreate this look, we went with simple and used a woollen cardigan from my daughter’s wardrobe, without adding any alterations.

If you do not already have a jacket that will work, you can search for a pink button-up jacket at your local clothing stores or head to the thrift shop to see what you can find.

There are also some pink blazers that would work on Amazon.

Anything that is white or cream can easily be dyed pink too if you’re willing. And if you want, just add large pink buttons for a bolder look.

Luna wears a black bubble skirt with bright coloured shapes on it. You could easily recreate this look by stitching coloured shapes to a plain black shirt or using fabric paints to achieve the look.

My daughter is wearing a dress from her closet to give the look of a skirt. It is navy blue but the bright patterns give a similar look.

A pair of bright blue tights or leggings that you may already have in your drawer is perfect for this part of the costume, otherwise, you should be able to find something similar in the shops or a thrift store for cheap.

Luna wears a pair of thick, long striped songs that she wears pushed down with her leggings. These are in different colours. These leg warmers would be a great option!

My daughter chose not to wear socks and she did not want to get too hot. Her costume, her choice! I did offer.

A pair of Converse Chuck Taylor Hi-Tops are perfect to recreate Luna’s shoes for this DIY Book Week costume or a cheap pair of similar sneakers.

My daughter currently loves her ankle boots so she chose to wear these for her costume.

Luna wears a crossover bag in dark blues and purples. You will likely find similar in a thrift store if you don’t have something at home that will work, or in a hippie clothing store alternatively.

We chose to use a shoulder bag I got from China many years ago, so while the pattern is a little bolder and it doesn’t have the crossbody style, it was the bag my daughter preferred when I offered her a few options. She was excited to be able to carry her Quibbler and wand in there.

For our DIY copy of The Quibbler, an essential prop for this iconic Luna costume, we found a printable PDF online via an online search. I am not sure who the original source of the magazine cover is as it only brought up a Google Drive link but you can find the file here.

I printed the two covers on cardstock. You can also use glossy photo paper if you want that really authentic magazine look.

The PDF is in US Letter size so I did need to trim the cover after printing on A4 paper. I then stapled them together with a bunch of blank papers inside.

My daughter has since been drawing pictures of Miss Lovegood and the rest of the Harry Potter characters inside to make it look like a real magazine. Super cute!

Luna’s wand was the other item we purchased from a store, at our local Big W Australia store. It was specifically a Luna-style wand and easier than making our own version.

You can also purchase a Luna Lovegood wand from Amazon or Amazon Australia.

If you would prefer to make a DIY wand, there is a fantastic Youtube tutorial I found that is far better quality than our plastic one. It would be a perfect cosplay accessory!

Luna also wears a few items of quirky jewellery to accessorise her outfit! The most memorable are her radish earrings. My daughter does not yet have her ears pierced so we were unable to add this accessory.

You can find some cute replica Luna earrings on Etsy or these cute radish studs on Amazon.

Or you can make your own using polymer clay and earring hooks, or clip-on earrings if your child does not have pierced ears yet.

She also wears a black and purple beetle-shaped ring which you can also find a replicated version on Etsy, or check the Halloween section at your local store and you might find a similar creepy crawly ring that will work!

The final touch to your homemade Luna Lovegood costume is a side ponytail. If you or your child have dark hair, you may want to wear a cheap wig to complete the look.

My daughter has rather short hair these days so her side ponytail doesn’t really sit down her shoulder like Luna’s but she thinks it’s a great hairstyle and wants her hair like this often now!

How Much Did This Costume Cost Us?

We only purchased 2 items for our Luna Lovegood costume – the glasses and the wand. These two items cost us a total of $13.

Everything else came from my daughter’s wardrobe with the exception of printing off The Quibbler cover, which I did on our home printer.

A cheap costume overall and my daughter absolutely loves it!

If your child would prefer to wear the Ravenclaw house uniform, they will need a few different accessories to go with their costume.

You could easily mix and match between Luna’s casual Quibbler outfit and her Ravenclaw robes for a look that is uniquely yours!

Here are some great options for Ravenclaw costumes:

What Is Book Week?

Here in Australia, Book Week is an annual event that celebrates books and reading in Australian schools. It is typically held in August and schools across the country encourage students to dress up as their favourite book characters.

There are usually a number of different activities held during Book Week, such as author visits, creative writing competitions and story-telling sessions. It’s a great week for encouraging kids to get excited about reading!

It is a similar event to World Book Day which takes place in many countries in the Northern Hemisphere as a celebration of reading and literature. Plus, who doesn’t love a chance to dress up?

But this costume isn’t limited to just Book parades! It makes a fun kids Halloween costume or the perfect option for a Harry Potter party too!

If your child is a younger Harry Potter fan like my daughter, while she knows and adores Luna, there is a lot about the character she does not yet know since she is not yet at the age of reading the Harry Potter books.

So if your child needs to brush up on their Luna knowledge for their Book Week character parade, here are some quick facts about Luna Lovegood:

Hufflepuff students are known for their deep wisdom. If you want to really get into character, here are some of the best quotes by Luna Lovegood that your child could memorise and recite during their time in character at the Book Week parade:

If you’re looking for a fun and easy DIY Luna Lovegood costume for your child, we’ve got you covered. This tutorial will show you how to create the outfit using everyday items for a fun book character costume for the Book parade or when looking for a DIY Halloween costume for kids or adults!