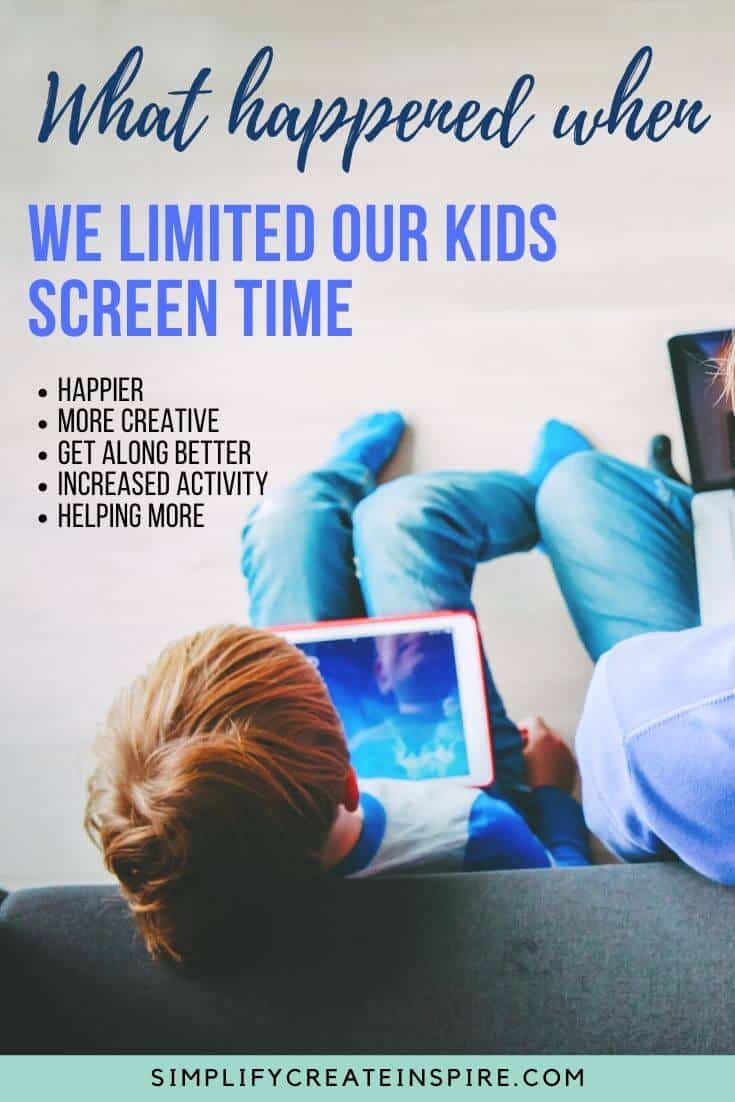 We introduced tech-free days twice a week with our kids and saw an instant improvement in behaviour, attitude and the frequency of arguments. This small change to our weekly routine has been a total game-changer, with us seeing many benefits to limiting screen time in our household long term.

When we started the school stage with our eldest daughter, we were fairly relaxed with her activities in the afternoons, knowing that she was tired from a big day of learning and playing.

This meant if she wanted to relax in front of the television, okay.

And it wasn’t any great issue initially.

However, moving into grade 1, her homework increased and it became a daily battle getting her to complete her required activities each night.

She was also resistant to completing chores and general tidying. She argued with her sister over who picked the program. But most of all, both their attitudes just sucked!

Honestly, I was getting really tired of the daily battles about all of these things. Simply because they would choose to watch television instead.

One day I decided enough was enough!

That’s when we started our tech-free days routine each week!

How To Reduce Screen Time For Kids

Each week we have 2 technology-free days. Those days for us are tech-free Tuesday and tech-free Thursday. We picked Tuesday and Thursday mostly because they sounded good and were easy to remember.

We didn’t just dump this decision on the kids on the day though.

One Monday, after some particularly unpleasant behaviour, I sat down with both our girls, who were 6 and 3 at the time and I explained that we would be having a change to our weekly routine.

They were told there would be no television or DVDs on Tuesday and Thursday each week. This also meant no iPad and other electronics, however, our girls were not using these devices throughout the week. They do sporadically use the Playstation, so this was restricted too.

There were some complaints and a little resistance, however the next day, on our first tech-free Tuesday, both girls accepted their new fate and went about their free time doing non-technology activities.

They coloured, they played with their toys and they went outside. Together!

It was exactly how I wanted them to spend their time after school.

This limited screen time routine has been part of our weekly household rules for over a year now. It has been a positive change and one that I wish I had made earlier.

There are several interesting things that happened almost immediately upon starting our no technology days at home.

What I love especially now is that it is our eldest is always vigilant about what day it is and announces to everyone that it is a tech-free day when we start the morning.

She keeps her little sister in check, who would still likely choose television over some of her other activities.

In fact, I do still get a lot of requests from our youngest to watch television, even with repeat reminders about what day it is. However, she accepts this without defiance.

How We Manage Other Types of Technology

As I mentioned earlier, we only allow our children to use tablets during the weekend and even that time is limited.

We used to allow our youngest a little more freedom to do this during the week, and she became a little obsessive as most kids do, so it was an easy decision to change this early on.

We have 2 spare tablets from having upgraded ours – an iPad and a Samsung tablet that have only a few apps on them. Typically, their favourite thing to do is usually watch YouTube videos, which drives me crazy. But some of the videos they watch aren’t total garbage.

They have the kids’ version of the YouTube app installed. On Friday or Saturday night, following good behaviour, completed chores and getting ready for bed, they are allowed one hour of tablet time.

This is a treat they appreciate and understand the value of. This makes it effective in getting them motivated for their chores if we are having one of ‘those days’. They also know if they aren’t well behaved during the day, they will lose their privilege.

What If They Are Resistant?

Like any new habit, it takes time for kids to adjust to the idea of no screen time on a regular basis. In fact, you may even feel like throwing in the towel and giving in initially when they are reacting negatively to the change.

Try to persevere. Most kids will adjust in time! And the benefits of reducing screen time are worth some of the challenges you may get initially.

Here are some ways to help ease your children into reduced screen time:

Our Exceptions to Tech-Free

We do allow music to play in the background while they are playing on occasion. This is something I control via my Spotify account through a Bluetooth speaker.

The other exception we occasionally make is allowing them to use their school learning program on the computer for a short period. They have a school subscription for Reading Eggs here in Australia, which encourages learning, similar to ABC Mouse. When we allow this, it is for half an hour only.

In saying this, they almost never ask for it anyway, preferring to play with their toys instead.

Creating limits on technology for our children has made a notable difference in their behaviour. It has also improved their moods and willingness to help out around the home.

They are happier, more resilient, calmer and better friends when we reduce their technology time. This is a huge win in our household!

It also means more engaged time together as a family, without the distraction of technology. This is by far one of my favourite benefits of limiting screen time for our children.

Update September 2022 – We first started our weekly technology free day routine almost 3 years ago. Fast forward to today when our girls are 7 and almost 10 and this is still a routine in our household. Both girls automatically know to do something that does not involve screens these days and I usually find them building LEGO, engaging in pretend play or doing something with pens and paper. The occasional exception we make is allowing them to play music in the background while they play. They love to jump on the trampoline to music especially. Overall, it has still been one of the best changes we have made in our household!